Thousands will have fond memories of Cliff Ellis, one of the Hunter Valley’s most respected horsemen who passed away at Scone on the night of December 30 three days after his 87th birthday.

For a quarter of a century until his retirement from the saddle in 2011, he was one of the leaders on horseback in the annual Horse Festival parade at Scone in May each year, an imposing figure, the epitome of the horseman and of the history of the horse in the Hunter Valley, a region in which he lived all his life.

Denman born and raised on the family’s dairy farm between that town and Jerrys Plains, Cliff was the second youngest of five children, a great grandson of Thomas Ellis, a stockman who migrated from Devon in England in 1837 to manage the settlement established at Jerrys Plains under the name of Arrowfield, now home for thoroughbred breeding giant Coolmore, by one of the Upper Hunter’s foremost pioneers, George Bowman.

Cliff had eminent pioneer pastoralists on both sides as his mother descended from John Wood, a London commodities broker who moved to New South Wales in 1818.

He squatted on 180,000 acres of country which he called Brundah Station southwest of what is Cowra.

John Wood was also one of the fathers of the Australian Thoroughbred.

In particular, he imported mares from Chile in South America which became the foundation of the horse breeding stock on Brundah and which no doubt can be found in some modern horses with colonial heritage.

Educated at a small bush school, Cliff, because of the shortage of labour owing to the war, went to work on the dairy farm at 14.

Fortunately for the horse world, the farm was sold in 1949 and he began more than 50 years involvement following a love of the thoroughbred.

The first 20 were in the historic Widden Valley, the first four breaking in and educating horses under Bill Harris at his family’s Holbrook, then the home for the very good imported sire Persian Book.

The balance was with the Flynns, Tom and his managing son Ross, at neighbouring Oakleigh and also Emu Vale, a holding accessed through the Widden Stud.

It was managed for a time by Cliff.

An outstanding source of good horses for over half a century in the ownership of Herbert  Thompson, a member of the Widden Stud pioneer family, Oakleigh was developed through the efforts of Ross Flynn and Cliff Ellis from the early 1950s into one of Australia’s most upmarket studs with the top sire being the importation Red Gauntlet.

They pioneered modern methods of preparing yearlings for sale embracing feeding and handling from weaning and sale grooming which are practiced by most major vendors today.

In presentation the Oakleigh yearlings, many of them shown in the ring by Cliff, were the jewels of the Inglis Easter sales in the 1960s.

Big moments in the life of Cliff Ellis while at Oakleigh included the win of a horse he bred and sold, the Jack Green (Sydney) trained Hua gelding Johnno in track record time in the 1959 Scone Cup – total prize money $1,550, his marriage to Jenifer Crockett in 1961 and his  topping of the fourth day (small vendors) of the 1962 Easter sale with a Pirate King half-brother to Johnno.

Johnno, by the way, became a celebrity again when, after being caught up in a major flood on the Hawkesbury, he swam some considerable distance to safety and was found sheltering on the verandah of a house.

The Ellis family Cliff, Jen and their then five-year-old son Tim, left the remoteness of Widden Valley in 1971 and he became the stud manager for England born Major James Mitchell, the owner of Yarraman Park, a stud farm at Scone which he acquired from famous jockey George Moore.

The wisdom of Cliff Ellis was very valuable for young horsemen learning their trade at Yarraman Park.

Two who went on to prominence as trainers are Guy Walter - a number one Sydney trainer and Murray Johnson.

Murray flies the flag for Australia in America - a country in which one of his runners, Perfect Drift, finished third in the Kentucky Derby.

A great joy for Cliff and Jenifer was the entrusting into their care for foaling down and walking into a sire in 1994 of Sandy Tait’s and Jill Nivison’s Whiskey Road mare Whisked.

A son of the Blushing Groom sire Nassipour, the foal subsequently raced as the gelded Tie the Knot out of the Guy Walter stables at Warwick Farm, winning 21 races, 13 Group 1s and earning $6,212,835.

He was one of a number of good horses delivered by the Ellis’ after they left Yarraman Park and established an agistment complex - Kingdon Farm at Parkville near Scone in1979.

The primary focus was the preparation and care of clients’ mares, growing their offspring and marketing yearlings.

In 1983 yearlings prepared by Cliff Ellis topped not only the individual price, but also the aggregate price at the Easter Sale.

They also stood the sires Piccolino, Sungazer and Blazing Ruler and for about a dozen years Cliff lectured on the Horse Industry at the Scone TAFE.

Retired to Scone in 2000, Cliff was a major contributor to Scone racing and breeding administration for a quarter of a century.

He served on the Race Club committee for many years and was a foundation committee member of the Hunter Valley Bloodhorse Breeders’ Association.

He was so highly respected that in1987 he was awarded the Hunter Valley Bloodhorse Breeders Service to Industry Award and in 1999 was the Scone Horse Festival VIP. He was also made a Life Member of the Scone Race Club.

Cliff is survived by Jenifer, his wife for over 50 years, their son Timothy and his wife Rebecca, “the daughter he always wanted”. 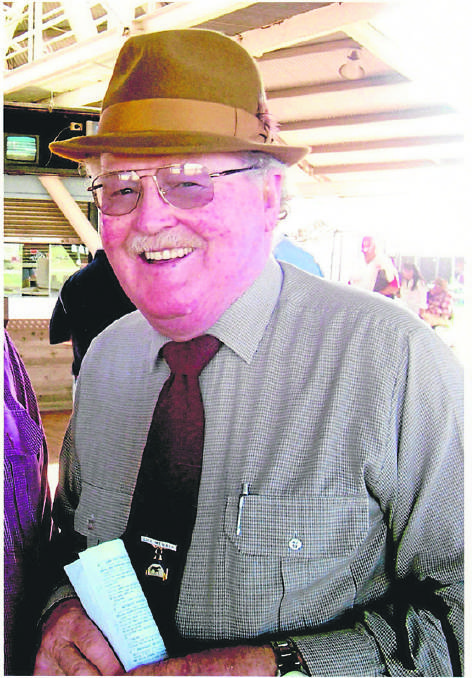